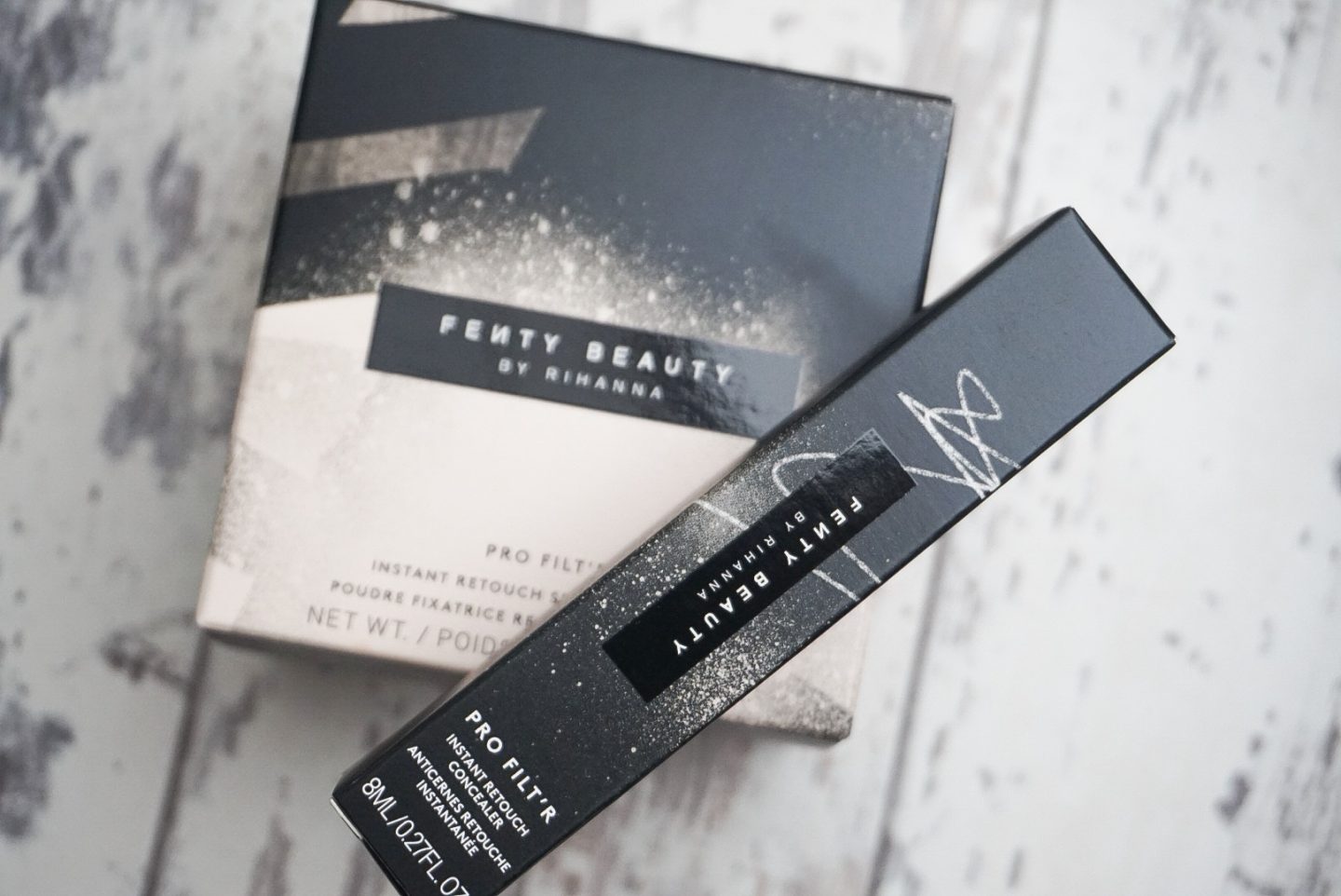 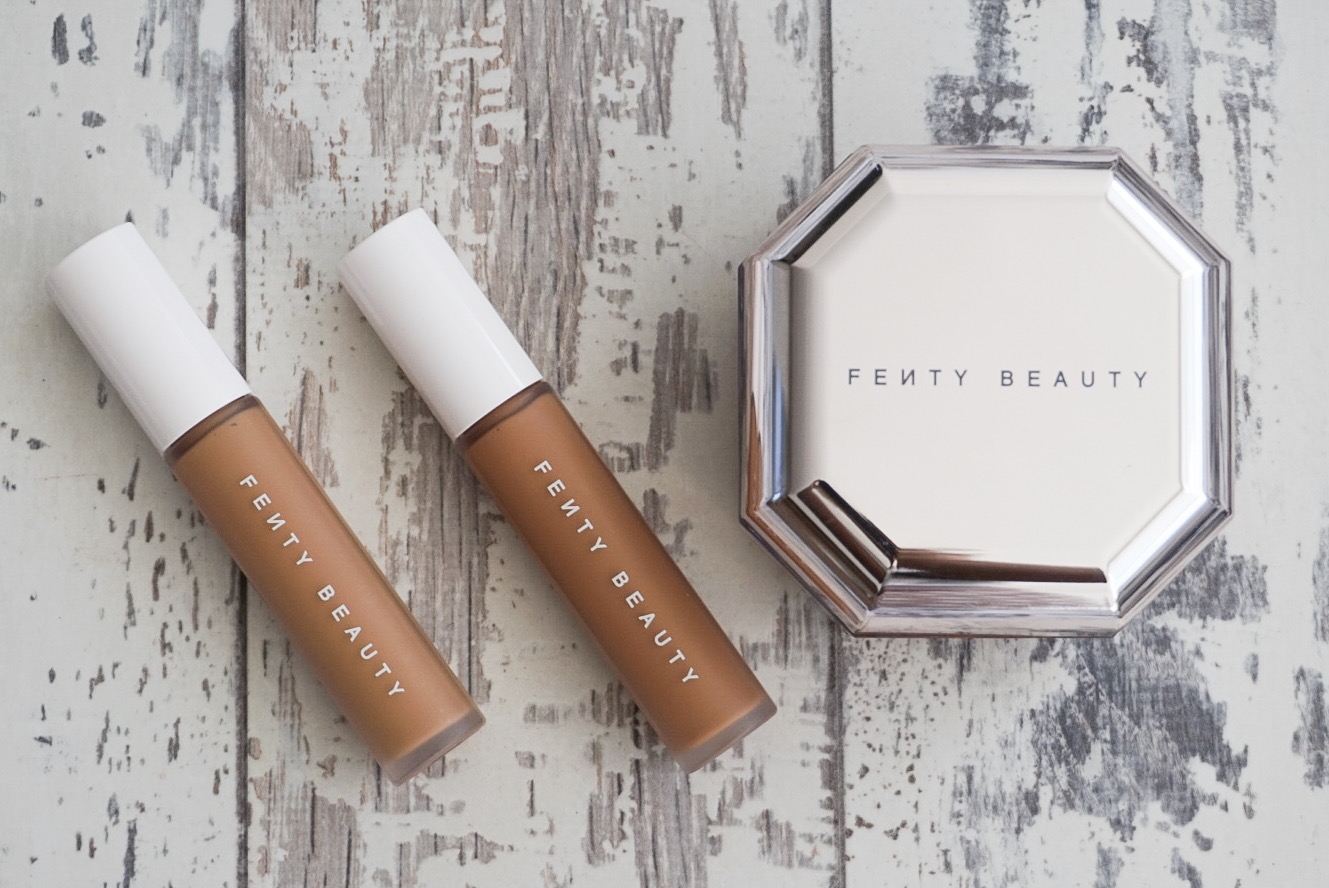 So this post is LONNNNG overdue and I apologise.

February is a crazy busy month for me and I’ve been working hard on creating YouTube content BUT for the readers out there I’m back and I’m here to briefly talk about Fenty’s new complexion releases.

I was a big fan of the initial complexion products, click HERE to read, so I had the highest hopes for the concealers and powders but long story short – disappointment is what I was left with.

Let’s start with the concealers.

From swatches online and swatching in store, I figured these were the best shades to go for out of the 50 on offer. Fenty does have a chart, which they use to recommend shades but I would flat out ignore it as it makes no sense to me. There are so many various undertones and shades available, it’s really down to personal preferences when it comes to choosing the right shade for you. I also feel like they are upselling, which is something I cannot stand.

Upon swatch, the concealers are thick and creamy which instantly made me wonder how well this would work under the eyes, considering the concealers have been claimed by Fenty to be: “LIGHT AS AIR, CREASEPROOF.”

It didn’t take me long to find out that it didn’t work well.

The thick consistency meant that the concealers moved around and settled into fine lines almost instantly. This was something I had never experienced before and it left me baffled.

Fenty letting the product sit to allow it to set before using a powder to set but because this sinks into lines almost instantly, the result of this had me having to use my beauty blender several times to remove the build-up of the concealer from the natural lines under my eyes and around my nose.

Once set with powder, the concealers look dry, VERY dry and I could do nothing to get rid of that dryness. I tried less powder, I tried sprays, applying with damp sponges – NOTHING would help. This dryness meant that by the end of the day, the concealer looks cracked and creased under my eye – horrible!

I have tried for nearly a month to like these concealers but I’ve got nothing!

The only pros I have is that it seems to blend out well and it’s long-lasting and feels lightweigh but these pros are useless if the concealer doesn’t look good and it doesn’t.

This powder (thankfully) was more to my liking.

Fenty created a few of these powders for baking as well as face setting. I thought it was huge waste of money to buy a baking powder for £24 so I went with a shade that I can use to set my overall face.

Nutmeg is your standard warm, , so not the BEST offering for those of us with golden undertones but it’s not a complete .

The powder itself is very finely milled, making it feel like you’re almost wearing nothing whilst giving your skin a super soft finish. There is also a slight scent to it but it’s not overpowering and it disappears once applied to the skin.

I did a comparison swatch of Fenty’s Nutmeg to Laura Mercier Medium Deep Setting powder to see if they were similar and I was surprised to find that they were not.

In my powder swatch photo above, Fenty is on the left and LM is on the right.

Fenty applied almost like a cream because of how finely milled it is, whilst LM seemed a bit chalkier and richer in . I also found that Fenty’s powder has much less transfer when compared to LM. LM’s Medium Deep transferred to an incredible degree so I stopped using it but with Fenty transfer was very minimal which is a winning point for me!

All in all, I REALLY dislike the concealers and I’m actually really disappointed in Fenty for producing such a high priced concealer that doesn’t really live up to of the claims advertised with it. I would not recommend these concealers.

The powder on the other hand is really nice and I’d say yes to picking it up if you were not a fan of the LM powder. As mentioned before, it is a red based powder so if you have golden undertones you can’t go OTT with this or you’ll look crazy.

This release was a bit of an anti-climax for me because of the concealers. I cannot remember the last time I disliked a product this much.